Advocating for your child with special needs

See the podcast here.
Navigating the special education system can be confusing, overwhelming and emotional. You’re worried about your child. You’re dealing with people you don’t know, information that is new and an alphabet soup’s worth of acronyms.
No parent should go into it unprepared. At Raising Arizona Kids magazine’s first annual Special Needs Resource Fair, panelists explained the pros and cons of self-advocacy, paid professional advocacy and paid legal representation — and when each option should be considered.

KGK in the News


Baker had been involved in the program, formerly known as Future Farmers of America, and wished to submit an application to receive the FFA state degree, an honor in the organization. He reportedly was suspended from FFA in March 2015, according to court documents but still requested that the school submit his application.
An email sent to Baker’s family in April 2015 suggested that the student’s application was submitted but later recalled. However, Baker’s attorneys questioned whether the school had ever submitted the application.
In February, Baker submitted a formal request to the district seeking to review all documents related to his FFA application. He also asked for copies of all FFA state degree applications submitted by other students in 2015.
The district reportedly refused to release the documents due to standards set in the federal Family Educational Rights and Privacy Act, which bars the public release of student records without parental consent.
Lori Kirsch-Goodwin, Baker’s Scottsdale attorney, stipulated that the FFA applications of other students could still be released with names and personal information blotted out. The district reportedly still did not grant this request.
Kirsch-Goodwin told the Casa Grande Dispatch she had wanted the applications of other students to compare signatures listed at the bottom of each. State degree applications must be signed by the school’s FFA adviser and the FFA state representative.
The plaintiff attorneys believed one of the signatures on Baker’s application had been forged to make it appear the school had submitted it. Therefore, the applications of other students could be used to compare and confirm the forgery suspicions.
To the surprise of the plaintiff attorneys, the district eventually admitted that Baker’s application was never submitted. According to court documents, CGUHS teacher Brittnie England declared the application was not sent and that signed copies of other student applications were not in her possession.
Kirsch-Goodwin said it was upsetting to discover that documents her client had been chasing after for months were never available. The question as to why the district did not submit Baker’s application remains unanswered, she added.
On Aug. 11, a Pinal County judge ordered the district to pay more than $8,000 in attorney fees to the plaintiff. The district’s attorney attempted to make the argument that the district shouldn’t pay attorney fees since it couldn’t deny access to records that it didn’t possess.
Judge Stephen McCarville concluded that since there was no mention of records being unavailable in court documents submitted by the defendant in June, the district was liable for paying some attorney fees.
The Dispatch reached out to the district’s attorney to ask whether it would appeal paying these fees but did not receive a response.
Kirsch-Goodwin said her clients have not decided yet whether to proceed with filing a lawsuit against the district and suing for damages incurred through the dispute.
Baker’s family declined to comment on the litigation to the Dispatch since the matter is still pending.
The district’s Governing Board may hold an executive session at 10 a.m. today to discuss the pending litigation. Executive sessions are not open to the public, and discussion of pending litigation is one of the reasons they are allowed under Arizona law.
Posted by Kirsch-Goodwin and Kirsch at 10:08 AM 1 comment: 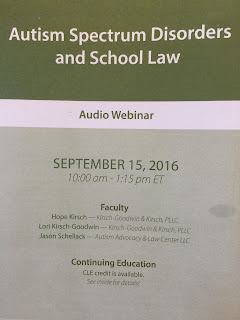 For more info or to register, go to:
http://www.nbi-sems.com/Details.aspx/R-73757ER%7C?ctname=SPKEM
Posted by Kirsch-Goodwin and Kirsch at 2:44 PM No comments:

The United States Department of Education recently provided guidance (advice) to states and school districts, including charter schools, regarding their responsibilities to students with disabilities attending on-line (virtual) schools: those responsibilities are not diminished and remain the same! "The educational rights and protections afforded to children with disabilities and their parents
under IDEA must not be diminished or compromised when children with disabilities attend virtual schools that are constituted as LEAs or are public schools of an LEA."
See the OSEP letter here:
http://www2.ed.gov/policy/speced/guid/idea/memosdcltrs/dcl--virtual-schools--08-05-2016.pdf
For more information on FAPE, visit our website, Kirsch-Goodwin & Kirsch.

Posted by Kirsch-Goodwin and Kirsch at 3:16 PM No comments:

Does your child have behavior problems in school? There's help.

On August 1, 2016, the Office of Special Education Programs (OSEP) of the United States Department of Education published a Letter to public schools and charter schools clarifying that under the Individuals with Disabilities Education Act (IDEA), schools must provide appropriate behavioral interventions and supports to students whose behaviors interfere with learning so that they can have a meaningful access to their education, that is, a free appropriate public education (FAPE) and placement in the least restrictive environment (LRE). Behavioral interventions and supports must be provided in order to help avoid disciplinary removals (suspension and expulsions).
You can read the entire Letter (called a "Dear Colleague Letter"), at http://www2.ed.gov/policy/gen/guid/school-discipline/files/dcl-on-pbis-in-ieps--08-01-2016.pdf

For more information about discipline of students with special needs in Arizona, visit KGK.

Posted by Kirsch-Goodwin and Kirsch at 1:59 PM No comments:

See the news article about the beginning of KGK here:
http://archive.azcentral.com/abgnews/articles/0824abg-sr-smallibz0824.html

Posted by Kirsch-Goodwin and Kirsch at 4:25 PM No comments: