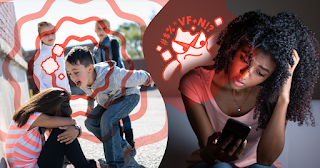 What is Bullying?  Bullying is unwanted, aggressive behavior among school aged children that involves a real or perceived power imbalance. The behavior is repeated, or has the potential to be repeated, over time. Both students who are bullied and who bully others may have serious, lasting problems. In order to be considered bullying, the behavior must be aggressive and include an imbalance of power repeatedly.  Students who bully use their power—such as physical strength, access to embarrassing information, or popularity—to control or harm others.  Power imbalances can change over time and in different situations, even if they involve the same people.  Bullying behaviors happen more than once or have the potential to happen more than once.  Bullying includes actions such as making threats, spreading rumors, attacking someone physically or verbally, and excluding someone from a group on purpose.

Where and when does bullying take place?  Bullying can occur during or after school hours. While most reported bullying happens in the school building, a significant percentage also happens in places like on the playground or the bus.  It can also happen travelling to or from school, in the youth’s neighborhood, or on the internet (cyberbullying).

What is Cyberbullying?  Cyberbullying is bullying that takes place using electronic technology.  Electronic technology includes devices and equipment such as cell phones, computers, and tablets as well as communication tools including social media sites, text messages, chat, and websites.  Examples of cyberbullying include mean text messages or emails, rumors sent by email or posted on social networking sites, and embarrassing pictures, videos, websites, or fake profiles.  Students who are being cyberbullied are often bullied in person as well. Additionally, students who are cyberbullied have a harder time getting away from the behavior.  Cyberbullying can happen 24 hours a day, 7 days a week, and reach a student even when he or she is alone.  It can happen any time of the day or night.  Cyberbullying messages and images can be posted anonymously and distributed quickly to a very wide audience. It can be difficult and sometimes impossible to trace the source.  Deleting inappropriate or harassing messages, texts, and pictures is extremely difficult after they have been posted or sent.  Whether done in person or through technology, the effects of bullying are similar.

Bullying of students with disabilities can amount to a denial of a FAPE as it creates a hostile learning environment such that may interfere with the student’s ability to access the curriculum.  For instance, they may not want to go to school, or they may be distracted by thoughts of the bully.

The U.S. Department of Education policy guidance states that “disability harassment that adversely affects an elementary or secondary student's education may also amount to a denial of FAPE under the IDEA.  Harassment of a student based on disability may decrease the student's ability to benefit from his or her education and amount to a denial of FAPE.”  Dear Colleague Letter regarding Disability Harassment, 7/25/2000.

There are a growing number of cases and court decisions concerning bullying and finding that peer-on-peer bullying – and bullying by the student’s teacher – can result in a denial of FAPE in violation of the IDEA and/or 504:

·         Bullying that is severe enough to alter the condition of student's education and create an abusive educational environment, coupled with the knowledge and deliberate indifference by school officials, is one way a student may establish a violation of the Rehabilitation Act.   D.A. v. Meridian Joint School Dist. No. 2, --- F.R.D. ----, 2013 WL 588761 (D.Idaho, 2013).

·         A student with emotional disabilities was denied FAPE based on the likelihood that a proposed placement would subject the student to continued bullying because of his perceived effeminacy.  Shore Regional High School Board of Education v. P.S., 381 F.3d 194 (3d Cir., 2004).  The placement of the student at the local high school was inappropriate because the school would not be able to prevent or stop the continued bullying.  The student had previously been subjected to relentless physical and verbal harassment as well as social isolation because he was "girlish."  Because the placement would expose him to further bullying and harassment, the placement would in effect deny the student FAPE.

When the special needs student is the perpetrator, or bully, the student should be referred for a Functional Behavior Assessment (“FBA”) from which a Behavior Intervention Plan (“BIP”) can be developed and implemented.

·         Develop and publicize comprehensive policies regarding bullying, harassing, and hazing;

·         Explain to students exactly what they should do if they are bullied or witness bullying;

·         Inform students that they will not be punished for reporting bullying in good faith.

·         Consider having an online system where students can report bullying.   Many students become nervous, scared, or shy, and having a more informal system for students to report bullying may encourage them to do so;

·            Consider the totality of circumstances presented when determining whether the conduct objectively constitutes harassment or bullying;

·            Make it clear, particularly to athletes and upperclassmen, that hazing will not be tolerated and that students will face serious discipline, including criminal charges, for any violations;

·            Be aware of the potential infringement of students’ First Amendment rights.

·            Even when disciplinary action is not allowed, take steps to inform and engage parents in the anti-bullying efforts.

Posted by Kirsch-Goodwin and Kirsch at 3:37 PM

Email ThisBlogThis!Share to TwitterShare to FacebookShare to Pinterest
Labels: bullying